You are here: Home / Market Trends / Microbes in the Tangle of Dementia 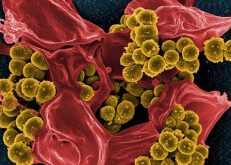 Misplaced your keys?  No worries, but if you forget what that shiny object is –that may be a sign of dementia.

Causes of dementia—dysfunction in memory or behavior—are many. The most feared, Alzheimer’s disease (AD) is also the most common perpetrator, affecting many millions across the globe. Briefly: AD aberrations include plaques and neurofibrillary tangles that are only observed on autopsy.

Researcher Pretorius from the University of Pretoria in South Africa along with colleagues in the United Kingdom published their excellent inquiry into the disease in the Journal of Alzheimer’s Disease recently.

The oxidative stress in these patients may be caused by more than one dysfunction:

All of these can lead to loss of synapses and neurons and cognitive decline.

How do microbes figure in dementia?

Toxic bacteria and resulting neuroinflammation can push the pileup of beta amyloids. Anything reducing that infectious stress or event, including antioxidants and a healthy defensive microbiome, may relieve it.

Results showed that probiotic consumption for 12 weeks improved cognitive function and some metabolic statuses in the AD patients.

Thus tending to the microbiome could be another avenue to arresting or preventing AD. While research is minimal, it is a vital new area of research, one that those in the probiotic sphere will want to watch.