You are here: Home / Microbiome Environment / A Look at Dysbiosis in Lung Cancer 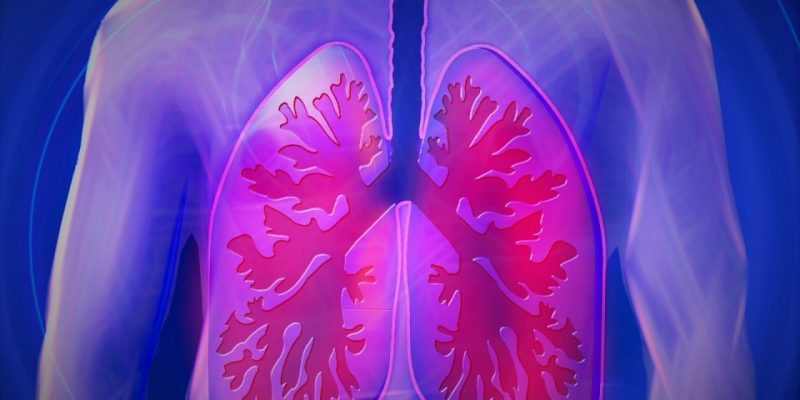 When healthy, lungs make breathing look easy. Behind the scenes, the vital exchange of oxygen and carbon dioxide runs along 1500 miles of alveoli, a microscopic metro that runs on perfect time.
But lungs can be derailed by many diseases and disorders: pneumonia, bronchitis, asthma, chronic obstructive pulmonary disease (COPD), emphysema, cancer as well as congenital disorders including cystic fibrosis.
Only a few decades ago, lungs were thought to be sterile, meaning no microbial colonies. That is no longer true. New molecular techniques reveal that the healthy lung contains low levels of bacterial sequences largely indistinguishable from upper respiratory flora. Diseased lungs have a distinct footprint. Take a look at one especially implacable antagonist.

Although total bacterial populations within lungs are quite small compared to the gut microbiota,  an imbalanced lung microbiome may lead to respiratory infections and pulmonary inflammation, thus driving lung tumorigenesis. Dysbiosis can drive tumor development through reduced defense. An intact commensal bacterial community in the lungs is required for host antitumor defenses in addition to its roles in infection and inflammation.

Antibiotic treatment in mice increases lung tumors. The lung microbiome maintains immune balance and can possibly allay the tumor-initiation from antibiotics. In fact, recurrent use of antibiotics, particularly penicillin, increases the risk of multiple human cancers, including lung cancer.

Researchers identified two potential bacterial biomarkers in saliva, Capnocytophaga and Veillonella, providing a possible noninvasive method for the detection of lung cancer via the oral-lung axis.
Another axis lies between the lung and gut. Aspiration into the lungs may be one pathway; metabolites and immune data are others. Gut-associated bacteria in the lungs are responsible for sepsis and acute respiratory distress syndrome.
In turn, microbes can pass to the gut from the lungs via the blood.
These new discoveries present a new frontier for lung diseases including cancer. Microbes are involved but the details are still hazy.