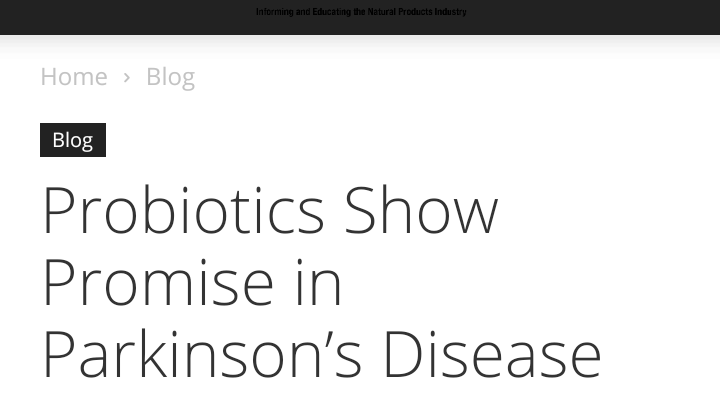 In addition to offering exclusive content on its website, the International Probiotics Association educates across other platforms. The latest offering is Probiotics Show Promise in Parkinson’s Disease, an article that appears on Whole Foods magazine online. The trade magazine showcases and informs in the natural products industry.

The gut-brain axis has become the focus of research regarding the complex relationship between the gut microbiome and both the enteric and central nervous systems.

IPA delved into Parkinson’s disease expressions: loss of dopaminergic neurons and a buildup of alpha-synuclein in surviving neurons. We found that neuroinflammation and reactive oxidative species production favor accumulation. Both are linked to microbial imbalance.

The history of discovery of the relationship between the gut microbiome and PD is described, including the Braak hypothesis.

“According to seminal work known as the Braak hypothesis, the α-synuclein misfolding may begin in the gut and spread “prion like” via the vagus nerve into the lower brainstem and ultimately to the midbrain.”

A cornerstone of the article reviews the various links:

And lastly, IPA explores the potential for probiotic impact in PD by reviewing clinical trials.

“Altogether, these findings suggest a potential role for probiotic strains in modulating inflammation and oxidative stress and protecting the epithelium from gut permeability. “

Read the entire article from IPA at the Whole Foods site online.