You are here: Home / Microbiome Environment / Kimchi: Can it fire up immunity? 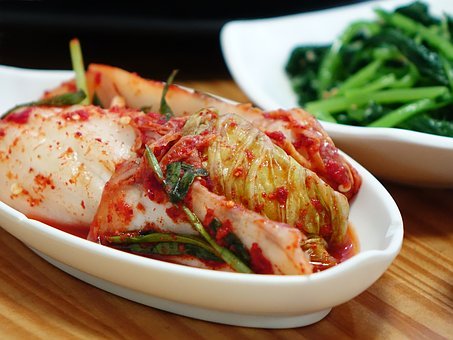 South Korea has been praised for its swift testing and rapid response in handling the coronavirus pandemic.

Another thought for a few in the probiotic community is that South Koreans may have another tool in their arsenal: healthful kimchi. Koreans love kimchi. This spicy fermented vegetable dish is consumed most days in most homes.

A few years back, researchers in Korea asked whether the lactic acid bacteria (LAB) produced during fermentation could improve immune function.

In the study, analysis showed that kimchi samples boasted these LAB:  the genus Weissella was predominant at 44.4%. W. koreensis was 27.2% and W. cibaria was 8.7%.

W. cibaria was reported to have anticancer activity, immune modulating activity, anti-inflammatory activity, and antioxidant activity. In addition it was shown to have antiviral properties against the avian flu virus.

Lactobacillus plantarum is more known as it is used in a starter in a wide range of products. Produced in the latter stages of kimchi fermentation, L. plantarum drives the acid content which prevents spoilage by bacteria or fungi. In addition to hanging tough in stomach acids, it also suppresses growth and adhesion of pathogens.

A 2019 study took a closer look at microbial properties of L. plantarum strains in mucosal health.

Mucosa are external tissues (covered with mucus) which are exposed to microorganisms known as commensal microbiota. Whereas the gut is the most studied site, other mucosa  include airways, nostrils, and the oral cavity.These sites are protected by mucus, immunoglobulin A, antimicrobial peptides, and innate and adaptive immune cells.

However, some mucosal commensal microbiota such as Escherichia coli, Staphylococcus spp., and Streptococcus spp. can turn pathogenic in certain situations such as invasion of highly virulent microbes and dysbiosis of microbiota by various means.

Probiotics may be one way to restore health and balance to mucosal microbiota. Possible mechanisms include:  production of bacteriocins, hydrogen peroxide and organic acids; reduction of pH; and immunomodulation.

As an example, in the aforementioned study, three different strains of Lactobacillus plantarum were isolated from kimchi.

H2O2 produced by L. plantarum strains of the present study may be involved in killing opportunistic pathogens.

Innate immunity was enhanced through:

Priming of immune responses by the microbiota to combat pathogens represents a potentially novel approach to control infectious disease.