You are here: Home / Market Trends / In Old Age, Our Altered Microbiomes Can Lead to Disease 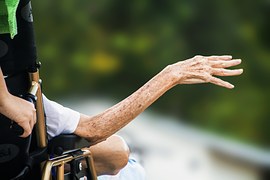 The aging microbiome bumps into challenges its younger self may not have: chronic diseases, exposure to group living, multiple medications and changes in dentition and swallowing that disrupt diet.
Yale Medical School Professor Vincent Quagliarello, MD discussed the vagaries of the microbiome in older adults recently at the Harvard Probiotics Symposium.

There are “a myriad of clinical changes, including a basal proinflammatory state (inflamm-aging), that directly interface with the microbiota of older adults and enhance susceptibility to disease accompany aging,” according to Quagliarello.

A little background: inflamm-aging is caused by the high concentrations of reactants and cytokines which leads to impaired immune responses and is implicated in age-related problems including atherosclerosis and neurodegeneration.

The issues facing the elderly, Quagliarello said, affect the microbiome and can lead to chronic illness. One example is the Clostridium difficile (C. difficile) infection. Here’s how it works: antibiotic exposure depletes gut resistance to harmful bacteria such as C. difficile, which in turn can become impervious to antibiotic treatments. It’s obviously a vicious cycle with few good outcomes.  Fortunately, a solution emerged: fecal transplant is proving to be revolutionary in normalizing a nasty and often fatal infestation.
The microbiota have been implicated in other physical conditions that affect older adults, detailed in “The microbiota and microbiome in aging: potential implications in health and age-related diseases,” which appeared in the Journal of American Geriatric Society in April of 2015 by Heidi Zapata and Vincent Quagliarello.

Thus, manipulation of the microbiota is showing promise as novel strategy to influence age-related problems.
In his talk, Dr. Quagliarello related how ELDERMET and the NU-AGE project are moving the research on gut microbiome and the elderly forward.  Funded by the Irish government, the ELDERMET project is a coalition of scientists at University College Cork in Ireland. Find many microbiome-associated research articles at this site.
Their work studies the relationship between diet, gut bacteria and health status in a large number of elderly Irish subjects.

Results fed into a 5 year project, now ended, called NU-AGE which is “a large multidisciplinary consortium with 30 partners, from 16 EU countries, involving nutritionists, biogerontologists, immunologists and molecular biologists from the most prestigious institutions in Europe.”

Interesting findings from ELDERMET include:

Researchers are also seeking links between our microbes and other common conditions in the elderly including pneumonia, urinary tract infection, and other cancers.  The best is yet to come.