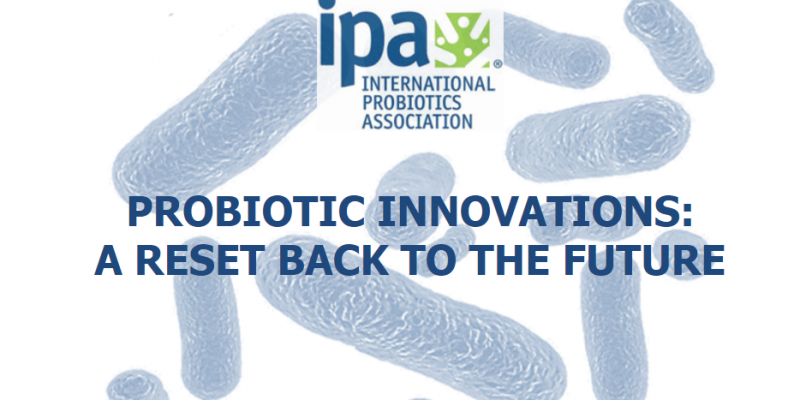 To usher in 2021 with a bit of optimism, the International Probiotics Association sponsored a provocative  webinar titled:

Probiotic Innovations: A Reset Back to the Future.

Executive Director George Paraskevakos introduced the 75-minute webinar — now available on demand — with an overview of the speakers’ talks which looked forward to potential new ways of looking at microbes and synbiotics.

Follows is a brief recap of the thought-provoking offerings.

Dietary Microbes: What Progressive Insight Could Lead to…

Fermented foods have been part of traditional diets worldwide with 3500 different products observed. Dr. Pot discussed how these foods are notably absent from food guides across the globe with one exception: India includes this category for pregnant women. Dietary microbes were described as  live microorganisms ingested as part of a normal diet. New definitions and more attention are being paid however consumer confusion still reigns. Dr. Pot suggests that new collaborations among stakeholders to advance science and recommendations will make this category a bigger part of microbial health going forward.

Does Shift Work Affect The Microbiota And Are Probiotics The Answer?

Microbiota exhibit circadian rhythm as cited by Dr. Alcock in research revealing how a high-fat diet changed the percentage of oscillating microbes in mice. And in humans, the salivary microbiome shows oscillating microbiota during sleep.

Dr. Alcock presented a small pilot study, which used his own colleagues in the emergency room who often work night shifts. The results showed that day shift workers revealed quite a few taxa exhibiting oscillations; night shift showed fewer. If reduction in oscillations is a problem, then possibly, Dr. Alcock posed, potential solutions such as intermittent fasting, prebiotics or probiotics may be of benefit.

Dr. Alcock closed with a quip from a colleague that  “Maybe we will see yogurt and fermented foods in our break rooms instead of overflowing donuts.”

Dr. Hill prefaced his presentation by stating that he was taking a speculative look at microbial intelligence.

Taking the premise that intelligence requires memory, learning and reasoning, Dr. Hill provided numerous examples in the scientific literature where bacteria may potentially have been exhibiting memory and “intelligent” responses to threats (e.g. rapid mutations).

Though his musings may be merely “ far-fetched hypotheses” (his words) with only embryonic scientific underpinnings,  the concepts that Dr. Hill posits are fascinating and may one day prove to be prescient.

Presented live on February 25, 2021, the webinar will be available on-demand for 60 days hence to interested members of the public. Don’t delay!