You are here: Home / Scientific Committee / Our Biology has been Shaped by Bacteria 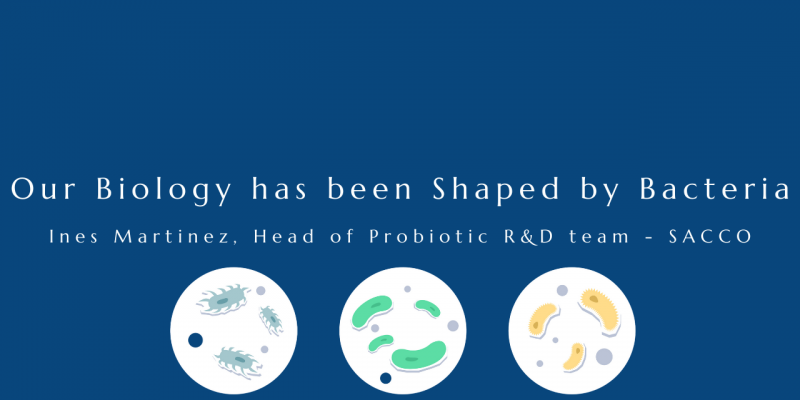 Bacteria have inhabited our planet for 3.5 billion years, this was a long time before eukaryotic life emerged in our planet approximately 2.7 billion years ago. In short, we have evolved in a bacterial world, thus every aspect of our biology has been shaped in the presence of bacteria.

So, what were the consequences of evolving in a bacterial world precisely? To start with, the atmospheric oxygen in our planet was generated by bacteria. Although the exact composition of the Earth’s atmosphere 4 billion years ago is unknown, scientists have determined that it was remarkably different to how we know it today, relatively inert, and mostly composed of carbon dioxide and nitrogen. It was primitive bacterial forms that gradually changed the atmosphere composition, and in particular the ancestors of cyanobacteria that through oxygenic photosynthesis released molecular oxygen into the atmosphere. Known as the Great Oxidation Event, the accumulation of oxygen throughout millions of years allowed multicellular eukaryotic life forms to evolve[1].

Bacteria gave us our cellular powerhouse[2]

Another remarkable example of how bacteria have shaped our biology are mitochondria and chloroplasts – the cellular powerhouses for animals and plants, respectively. We learnt this at school and many of us have since remained fascinated.

The endosymbiotic hypothesis states that around 2 billion years ago bacteria specialized in oxidative respiration were incorporated into the cytoplasm of other bacteria via endocytosis[3]. Respiration through oxidative phosphorylation gave a great evolutionary advantage in terms of energy harvesting to eukaryotes and allowed them to survive in a much wider type of environments than previously.

But besides oxygen and energy, our entire biology relies on bacteria. Because bacteria were on this planet before we came about, our evolution could take some short cuts relying on bacteria to exert some functions for us. Enzymes to digest fiber? No need, our gut bacteria can do this for us. An immune system ready to fend off every single pathogen cell, why bother? Thanks to our microbial partners, a much higher pathogen load is needed to cause disease than it would be necessary otherwise. The bacteria in our body will already take care of potential threats through competitive exclusion, production of inhibitory substances, and other mechanisms[4]. In addition, there is evidence indicating that our gut microbiota can be an important contributor to our vitamin intake[5].

So intricate has become this symbiosis that proper stimulation of our immune system early in life depends on being associated to the right bacteria at the right time[6]. Another example is the many molecules produced by members of our gut microbiota that act as signals to our metabolic and immune pathways, examples include short chain fatty acids and secondary bile salts as examples[7].

Bacteria cook for us!

Let’s not forget that besides the direct benefits that bacteria exert on our wellbeing, they also produce our fermented foods, yogurt, cheeses, olives, kimchi, sourdough, chocolate, coffee, and sausages to name a few. Food fermentation is a naturally occurring phenomenon, and throughout our history we have domesticated bacteria to provide us with fermented foods that appeal our taste. The byproducts of bacterial fermentation and the bacteria themselves present in foods can be beneficial to our health[8,9].

A delicate equilibrium shaped by millions of years of evolution

Due to the above, it is unsurprising that if our microbiota is out of balance – in a state of dysbiosis, our entire physiology will be negatively affected. When we think of our health, we must remember we are not alone! Besides a proper diet that satisfies not only our nutritional requirements but also those of our gut microbiota, a good night sleep, and an overall healthy lifestyle, probiotics can improve our wellbeing.

Probiotics can help redress some states of dysbiosis through the modulation of gut microbiota function, exclusion of pathogens, or simply restoring a potentially missing friend[ 1] [IM2] . In addition, probiotics are effective at boosting our immune system and alleviating gastrointestinal symptoms and discomfort.

In conclusion, billions of years of evolution of eukaryotes in a bacterial world resulted in the development of an intimate and intricate relationship between us and bacteria. Science will only keep uncovering fascinating ways in which bacteria help us and benefit our health.

[1] Schirrmeister BE, de Vos JM, Antonelli A, et al. Evolution of multicellularity coincided with increased diversification of cyanobacteria and the Great Oxidation Event. Proc Natl Acad Sci U S A. 2013;110(5)

[7] Martin AM, Sun Emily W., Rogers GB, et al. The Influence of the Gut Microbiome on Host Metabolism Through the Regulation of Gut Hormone Release. Frontiers in Physiology. 2019; 10.