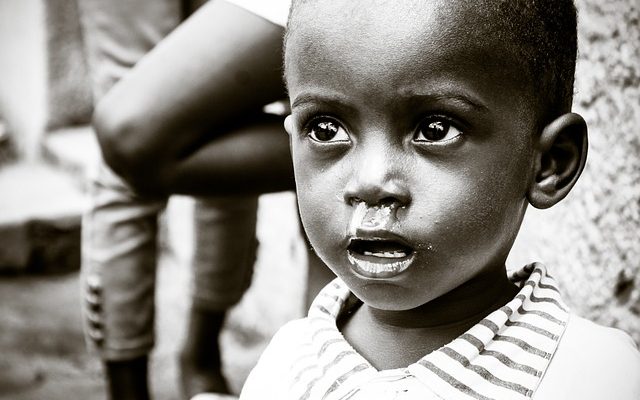 Heartbreakingly, malnutrition is responsible for 35% of deaths among children under five globally. And for survivors of early undernutrition, the long-term consequences may include increased risk of stunting, impaired neurodevelopment and negative social and economic impacts.

Recent research indicates that gut microbiota (GM) dysbiosis may be involved in development or maintenance of acute malnutrition, opening a window in which targeting the microbiome with probiotics may be beneficial.

As defined by the World Health Organization (WHO), SAM is identified by very low weight for height, visible severe wasting, or the presence of nutritional edema.

SAM classically presents as one of two distinct forms:

Fortunately, an extremely high fatality rate for such children can be reduced with appropriate hospital and community management. Recent studies suggest that SAM in children above 6 months of age who have no medical complications can be managed at the community level using specially formulated ready-to-use therapeutic foods (RUTFs). These lifesavers are lipid-based pastes that are energy dense, resist bacterial contamination, and need no cooking. Milk powder, sugar, vegetable oil, peanut butter, vitamins, and minerals are the usual ingredients.

RUTFs have reduced mortality in children with SAM, but incomplete restoration of healthy growth remains a major problem. Alarmingly, as many as 10% die during the year after discharge from nutritional care. More interventions are needed.

Though unclear, relationships between the type of nutrition intervention, the gut microbiota, and therapeutic responses are emerging areas of interest.

Malnutrition and the gut microbiome

Malnutrition appears to be associated with reduced GM diversity as well as microbiota maturity.

For example, in comparing stool samples of malnourished patients with kwashiorkor and healthy children from Niger and Senegal, researchers found decreased diversity and depletion in oxygen-sensitive prokaryotes and enrichment in potential pathogenic organisms.

However, it has also been suggested that disruption of normal development of the GM may be causally related to development of malnutrition. In support, a study with mice has confirmed that transfer of GM originating from undernourished children to germ-free mice impairs growth.

If early life GM dysbiosis can contribute to malnutrition, microbial interventions may be able to support repairing or normalization of the GM.

Probiotics and synbiotics to the test

Diarrhea in children is a major driver of malnutrition through reduction in food intake, decrease in absorption of nutrients, and increase in catabolism of nutrient reserves. Meta-analyses have found that probiotics reduce the duration of acute diarrhea by 1 day and reduce the risk of acute diarrhea lasting 4 days or more. However, most studies were performed in high-income countries and in well-nourished children. The knowledge of the impact of probiotic treatment in children with SAM is scarce.

Several bacterial species have been previously proposed as probiotic candidates as an alternative to fecal transplantation to address children suffering from SAM.

Let’s take a look at three studies that evaluated probiotics or synbiotics in this regard.

In what is referred to as the PRONUT study, 795 Malawian children with SAM (aged 5-14 years) were included in a well-designed placebo controlled trial. Effects of a synbiotic mixture (a combination of four lactic acid bacteria and four fermentable fiber sources) mixed with a RUTF was compared with a standard RUTF in the control group, for approximately 33 days.

There was no difference between groups in the primary outcome (nutritional cure), but a near significant (p=0.06) effect on outpatient mortality was found.

The ProbiSAM study conducted in Uganda investigated the effect of administrating a sachet of two probiotics daily (strains of Lactobacillus rhamnosus and Bifidobacterium animalis subsp. lactis) compared with placebo, for 8–12 weeks to 400 children (aged 0.5-6 years) hospitalized with SAM.

There was no difference between groups in the duration of diarrhea during hospitalization, but the probiotic intervention group had fewer days (26% reduction) with diarrhea during outpatient treatment. Mortality after hospital discharge was similar in the intervention and control groups.

In a follow-up of the previous study in Uganda reported in 2020, the team investigated GM evolution during rehabilitation from SAM and the impact of probiotics (strains of Lactobacillus rhamnosus and Bifidobacterium animalis subsp. lactis) supplementation on the GM during inpatient and outpatient treatment of SAM. They also asked whether GM composition and development is linked to the observed reduction in days with diarrhea when administered probiotics during the randomized controlled ProbiSAM trial.

Tragically, severe acute malnutrition (SAM) directly contributes to nearly one million deaths of children under age 5 annually and indirectly to millions more. Better solutions are urgently needed. Evidence suggests that GM dysbiosis may be involved in development or maintenance of acute malnutrition. A recent meta-analysis on probiotics and synbiotics use in SAM concluded that probiotics show promise, and may thus offer a potential direction for future research and management of SAM.