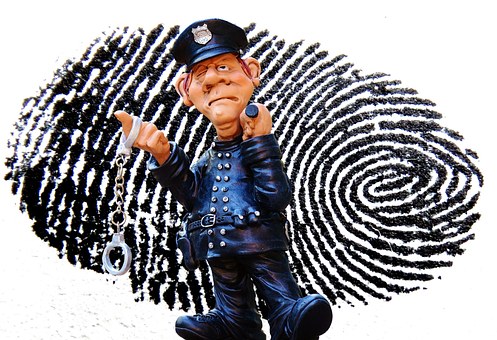 Fingerprints have led to many a criminal’s downfall.

Tips of our digits leave evidence for a very long time helping detectives link the perp to the crime. Alas, gloves are now de rigeur for all but the clumsiest.

Now forensic scientists may have a new tool for their investigations: microbes. As explored in IPA’s “Cloudy with a Chance of Microbes” humans emit a cloud combo that may serve as an identifying marker like DNA or a fingerprint.

The research by James F. Meadows and colleagues, Humans differ in their personal microbial cloud appeared in PeerJ on Sept 22, 2015. “One of the most surprising results from the first experiment,” wrote the authors,” was the extent to which the three different occupants were easily discernible from one another, both from a microbial community perspective and also when considering individual bacterial…”

Microbes also transfer to surfaces like doorknobs, cell phones and guns, as anyone who ever caught a cold can attest.

Outdoor air and pets contribute to surface microbes in a home but most are from humans. Visitors rapidly colonize the residence with their microbes when they arrive and deplete the picture within days after leaving.

The question is: how reliable is microbe matching?

A new study from the City University of Hong Kong followed households to see if microbiota matching could be achieved across time periods. David Wilkins and colleagues collected microbiota samples from household surfaces, household air and residents’ skin in nine Hong Kong residences throughout 2014 and determined the microbiota compositions through 16S rRNA gene analysis.

“While microbiota traces have potential forensic value, unlike fingerprints they are not static and may degrade in a way that preferentially erases features useful in identifying individuals.”

As this technology develops, evidence gathering will still rely on ink-blotted fingerprints.  So a word to the unwise: keep the gloves on.