You are here: Home / Microbiome Environment / Green Tea Works with Microbes to Detox 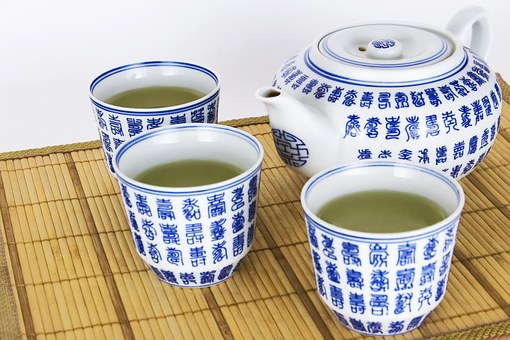 Green tea comes steeped in endorsements from nutritionists. This power beverage is known to help prevent chronic diseases including cancer, obesity, and metabolic syndrome.
The secret appears to lie in its polyphenols; epigallocatechin-3-gallate (EGCG) dominates.
Exactly how this particular polyphenol operates to avert diseases is largely unknown.

One idea: Toxic reactive cellular metabolites, such as ammonia and reactive carbonyl species (RCS) accumulate, leading to disease. Polyphenols may interfere with the collection of toxins.
A recent study addressed the actual mechanism. Shuwei Zhanga and colleagues investigated the in vivo interaction between the polyphenol abundant in green tea leaves, and ammonia and RCS. Microbiota facilitates the formation of the aminated metabolite of green tea polyphenol (-)-epigallocatechin-3-gallate which trap deleterious reactive endogenous metabolites will be published in Free Radical Biology & Medicine in February of 2019.
Initially, the scientists found that EGCG could be oxidized to EGCG quinone in mice, and then rapidly react with ammonia to generate an aminated EGCG metabolite.
Aminated metabolite has roughly the same biological activities of EGCG. Both EGCG and its aminated metabolite could further scavenge RCS to produce the RCS conjugates of EGCG and the aminated EGCG. Interestingly, both the aminated and the RCS conjugated metabolites of EGCG were detected in humans after drinking four cups of green tea per day.

Now the role of the microbiota comes into play

The authors state: “Altogether, this study provides in vivo evidences that EGCG has the capacity to scavenge toxic reactive metabolic wastes. This finding opens a new window to understand the underlying mechanisms by which drinking tea could prevent the development of chronic diseases.”

Put simply, make a resolution to drink green tea—lots of it. As a trash collector, it is a cheap and tasty way of neutralizing toxins in your gut with the assist of microbes.