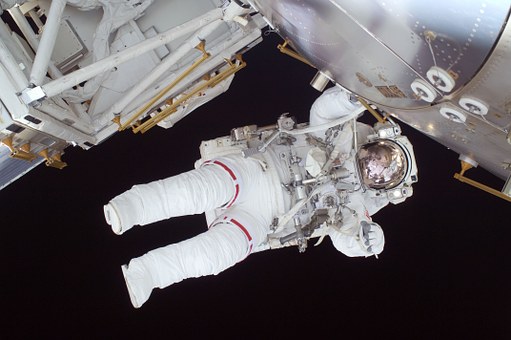 Since the first human soared into space in 1961, more than 500 others have followed. Only the healthiest of humans pass the mental and physical bars to become astronauts.

Observing an astronaut arrive back on earth—most often carried on a gurney because of the effects of prolonged weightlessness—is to witness a small slice of the stresses faced: zero gravity, isolation, poor diets and altered sleep. Indeed the harsh environment of space flight flirts with a sweep of problems including bone loss, kidney stones, infections, depression and metabolic disorders. Researchers are increasingly considering the influence of the microbiota in optimizing astronaut health.

In general, bacterial profiles of the gut, nasal and oral passages change during space missions for both sexes: reduced relative abundance of probiotic microbes from the genera Bifidobacterium and Lactobacillus and an increase in opportunistic pathogens.

More than ten percent of astronauts are women; impacts of space travel on female health may differ just as life on earth carries different risk levels depending on gender.

Camilla Urbaniak and Gregor Reid have published a paper titled The Potential Influence of the Microbiota and Probiotics on Women during Long Spaceflights.

“… conditions in space that shape microbial profiles, whether it be diet, hormones, microgravity or radiation, could impact male and female astronauts differently,” the researchers wrote.

Concerns for women astronauts, with an emphasis on microbial role:

Increase possibly due to enhanced adherence and invasion from microgravity; antibiotics may be less effective at treating. Possible solution: prevent infections from ascending from the vagina and urethra to the bladder, by administering probiotics.

While no evidence exists among females in space for short periods, extended travel may change the outcome. Reduced lactobacilli in the vagina reduce chances of conception in earth-bound studies. In addition bacterial vaginosis may decline if microbial balance is addressed.

Radiation exposure puts both sexes at higher risk but female cancers including breast and ovarian cancers are spotlighted. Interestingly, sleep changes in space are also a risk. Circadian rhythms control our microbes and when unbalanced, metabolic diseases can emerge.  Whether cancer results from altered sleep patterns is an open question but one with circumstantial links.

More common in females, irritable bowel syndrome may be treated with probiotics to decrease inflammation.

The authors advise future study on the effect of microgravity on gut, oral, breast, urinary and reproductive tract microbiota patterns in women.

“Future studies should examine how probiotics in dried and liquid forms are affected by microgravity and radiation; whether different strains might function better in space compared with on earth; appropriate dose for maximal health benefit; and recovery back to ‘normal’ upon re-entry to earth’s atmosphere.”

A review available here also emphasizes the careful selection of probiotics given the vital importance of health for astronauts in space.