You are here: Home / Microbiome Environment / Potential for Synbiotics in Space Travel 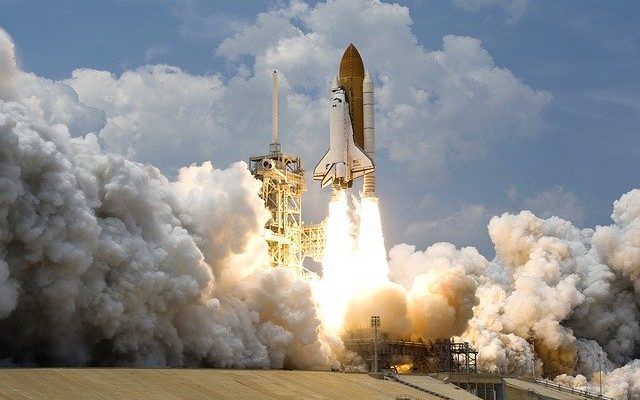 Rocketing to outer space may be one escape from earthly pandemics. But as any astronaut can attest, entering microgravity poses its own unique health challenges. For example, gut function and numerous bodily systems are impacted.

Scientists now believe that the microbiota of the gut may be a novel target for combatting some of these observed changes.

Since the early 1970s, the gut microbiome of space travelers has been scrutinized. Newer sequencing technologies developed in the last 20 years have enabled more in-depth analyses of the compositional and functional structure of the gut microbiome and its dynamics during space missions.

Travel in space starts with the launch; preparations for this and experiencing this create a stress. Further, being an astronaut requires quite a change in lifestyle ‘on the job.’ Space travel presents a number of stressors including microgravity, fluid shifts, cosmic radiation, sleep alterations, and confinement. Several of these pre- and post-launch stressors promote gut microbiota dysbiosis, as seen in both animal and human studies.

Microbial changes are also observed. Mice flown on several real space missions demonstrated a higher abundance of Clostridiales and fewer Lactobacillales. In one of these, mice flown for 37 days onboard the International Space Station also demonstrated “unchanged richness of microbial community, an altered community structure and an elevated Firmicutes-to-Bacteroidetes ratio.”

These observations in mice are comparable with the data from the recent NASA Twins Study. One identical twin astronaut was monitored before, during, and after a 1-year mission onboard the International Space Station (ISS); his twin served as a genetically matched ground control. While microbiome diversity remained substantially unchanged, an increase in the Firmicutes-to-Bacteroidetes ratio was seen in the twin in space. The latter effect did not persist upon return to Earth.

The Astronauts’ Microbiome project also yielded interesting space- associated impacts on the microbiomes of nine astronauts who spent six to twelve months in the ISS. Some of these changes:

In addition, two spaceflight missions completed from China demonstrated that the composition and function of the human gut microbiota were markedly affected by spaceflight. Marked fluctuations were also documented in a recent simulated spaceflight study conducted in humans.

The harms of gut dysbiosis are well-known, adversely impacting sophisticated and interwoven processes across the arc of microbial health.

Potential for Synbiotics in Space Travel

A team of researchers recently published Gut Microbiome and Space Travelers’ Health: State of the Art and Possible Pro/Prebiotic Strategies for Long-Term Space Missions. The review looks at changes in the gastrointestinal tract, energy intake imbalance, altered metabolism and satiety impairment, effects on the musculoskeletal and immune system and neurobehavioral health as well as the use of synbiotics supplements in this group.

Far too expansive to delineate here, the various described studies (animal and human) which suggest potential in this application should be valuable for interested stakeholders.

The authors conclude that preserving a healthy gut microbiota profile may help mitigate the unwanted effects on the space traveler’s body, thus contributing to the success of long-term missions.

“This could be achieved by optimizing diets to ensure adequate energy and fiber supply for SCFA production, while avoiding nutritional imbalances, as well as by integrating them with prebiotics, bioactive compounds and probiotics for potentially synergistic effects. Aside from prebiotics and bioactive compounds, probiotics, both traditional and next-generation ones, during spaceflights can be postulated as a non-invasive alternative –given that safety is assured- to protect space travelers against altered metabolism, satiety impairment, immune dysregulation, circadian rhythm changes, bone and muscle loss, as well as neurobehavioral disorders. “

The health challenges of space travel for even the fittest of candidates are considerable. Prebiotics, probiotics and synbiotics may one day alleviate some of those negative effects.

However, the authors of the above review caution that additional mechanistic, intervention and clinical studies are needed before these microbiota manipulation tools can be incorporated into spaceflight practice.