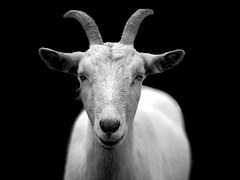 Goat milk costs a premium in trendy markets today but throughout most of the developing world, the tasty beverage is drunk daily by the poorest of people. The reason? Goats can be kept next to a hut while cows must have access to land for grazing, land which the impoverished don’t have. Goat milk is the “go-to” drink for the world’s poor.

No problem, because goat milk is easily digested and has some special nutrient qualities.

Researchers in Tamil Nadu, India were interested in the probiotic potential of such a popular milk. India has about 120 million goats, second only to China. While the majority are raised for meat, certain breeds contribute greatly to the nearly three million tons produced yearly in India.

Viswanathan and colleagues analyzed in the colostrum of the goat what is referred to as its total heterotrophic bacterial population (THBP) as well as Lactobacillus.

THBP and Lactobacilli was uncountable on Day 1, countable in next five days and then back to uncountable by day 7.

In addition, bacteriocins were produced by all three types. L. casei inhibited more common Gram positive and negative bacterial pathogens in foods than the other two.

Bacteriocins, as you may recall from a 2014 IPA blog found here, are peptides which kill off competitors and maintain space and food for themselves.

Food technologists see great value in tapping these bacteriocins to act as natural “antibiotics” to preserve food from contamination. The medical and pharmaceutical complex too is exploring how these bacterial by-products may fight disease.

Goats may eat pretty much anything (but not tin cans) as they forage for survival but they give us a great gift for better health.