You are here: Home / Archives / Messy Microbes in Schizophrenia 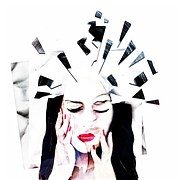 Schizophrenia is a brain disorder in which people hear imaginary voices, commands or threats. It is terrifying disease for which there is no known cure, only management with meds and other therapies. (Developing countries may have better rates of recovery--a fascinating node of exploration.)

As much as one to three percent of the global population suffers with schizophrenia; 10 percent when a close relative also has it.

This suggests a strong genetic connection. The National Institutes of Health (NIH) in the United States asserts on its website:

Several genes are associated with an increased risk of schizophrenia, but no gene alone appears to cause the disease.

Genes are the tinder and the environment is the match. Exposure to viruses, malnutrition or chemicals before birth is suspect. Maternal infections are increasingly seen as risk factors for schizophrenia. Influenza, toxoplasmosis, and genital/reproductive infection are linked to schizophrenia in offspring, according to researchers who published Maternal Infection and Schizophrenia: Implications for Prevention in the Schizophrenia Bulletin. Colleagues Alan S. Brown and Paul H. Patterson addressed how this could happen: Response to infections causes release of proteins such as cytokines which may alter brain chemistry.

Another idea is that autoantibodies—attacks against oneself—may be the cause of brain imbalances and hence behavioral dysfunction. As such, the microbiome presents a promising place to start looking for solutions. Read The role of microbes and autoimmunity in the pathogenesis of neuropsychiatric illness in Current Opinion in Rheumatology.

Recently, researchers identified a potential link between microbes in the throat and schizophrenia. Lead author Castro-Nallar of George Washington University, USA “sought to identify microbes associated with schizophrenia, as well as components that may be associated with or contribute to changes in the immune state of the person. In this study, the group found a significant difference in the microbiomes of healthy and schizophrenic patients.”

Intriguing. But as always, it remains to be seen whether the differences are causes or effects or perhaps totally happenstance.